It is the year 2599, and there are giant mutant insects oozing gore on planet Mars. Terraformars‘ (2016) director Takashi Miike has recreated the world of the manga written by Yuu Sasuga and illustrated by Kenichi Tachibana. A group of misfits and criminals from Earth are spliced with mutant insect genes, and sent to war on Mars. The film has been likened to Starship Troopers (Paul Verhoeven, 1997), and boasts a star-studded cast including Pacific Rim’s Rinko Kikuchi.

Longtime Fantasia-goers will remember being marked, amused, and shocked by Audition (1999). Viewers have returned year after year to witness Miike’s inventive films with their signature twists. These unexpected plot shifts turned a yakuza flick into a CGI-laden anime combat (Dead or Alive, 1999), and a sweet romance into a demented torture flick (Audition). With four films released in 1999 alone, it’s easy to see how Miike ended up with over 60 theatrically distributed films in 20 years. Previous directorial works were direct-to-video releases, and Miike sometimes still creates on video.

His movies tackle violence, taboos, and the family unit. There is often an underlying ‘message’ to the masses. In One Missed Call (2003), a nudge is given to the usage of modern technology (specifically cell phones). Another film being screened at Fantasia 2016, As The Gods Will (2014) includes a tongue-in-cheek scene about how society has sexualized our ideals of female beauty.

Miike took on the task to try recreating a world of floating boxes and overgrown living toys from yet another manga. As The Gods Will is neither horror nor comedy, yet both simultaneously. Though the film feels much like a satire overall, the director is hesitant to pigeonhole his movies – and with good reason. They are uncategorizable because they cull aspects of different genres all at once.

Part life lesson, part gratuitous gore, and an oft-exaggerated sense of humor, Miike’s huge catalog has something for everyone. It’s no surprise that Fantasia will be handing him a Lifetime Achievement Award on July 16th. Takashi Miike has become a leader in genre cinema, and has more than earned his status as Fantasia ‘darling’. 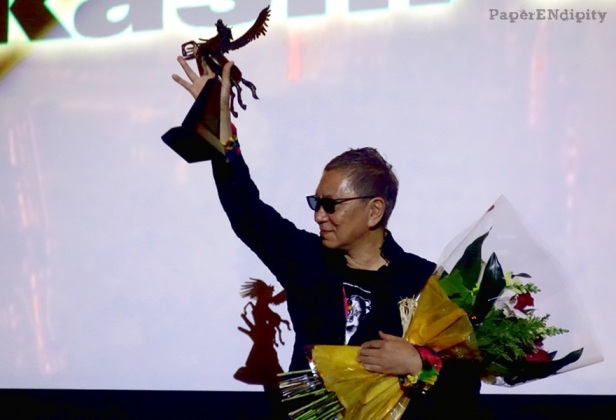 As the Gods Will Official Trailer: https://youtu.be/OEh1fT1IH14